**I wanted to share a bit of our journey with Maleah, in the hope of being able to encourage parents who are in need of a bit of Hope. I am in no way a super mum. I have to rely each day on God’s grace and power to work in and through the kids and my life. When Maleah came along this was reinforced to me – and still is regularly.

Psalms 139:1-18
Search Me, O God, and Know My Heart
To the choirmaster. A Psalm of David.
O LORD, you have searched me and known me!
You know when I sit down and when I rise up;
you discern my thoughts from afar.
You search out my path and my lying down
and are acquainted with all my ways.
Even before a word is on my tongue,
behold, O LORD, you know it altogether.
You hem me in, behind and before,
and lay your hand upon me.
Such knowledge is too wonderful for me;
it is high; I cannot attain it.
Where shall I go from your Spirit?
Or where shall I flee from your presence?
If I ascend to heaven, you are there!
If I make my bed in Sheol, you are there!
If I take the wings of the morning
and dwell in the uttermost parts of the sea,
even there your hand shall lead me,
and your right hand shall hold me.
If I say, “Surely the darkness shall cover me,
and the light about me be night,”
even the darkness is not dark to you;
the night is bright as the day,
for darkness is as light with you.
For you formed my inward parts;
you knitted me together in my mother’s womb.
I praise you, for I am fearfully and wonderfully made.
Wonderful are your works;
my soul knows it very well.
My frame was not hidden from you,
when I was being made in secret,
intricately woven in the depths of the earth.
Your eyes saw my unformed substance;
in your book were written, every one of them,
the days that were formed for me,
when as yet there was none of them.
How precious to me are your thoughts, O God!
How vast is the sum of them!
If I would count them, they are more than the sand.
I awake, and I am still with you.

The pregnancy had been different to the others, I was a lot smaller and the scan measurements were smaller for her. I was all lined up for my third c-section and Paul had a back injury at work, putting him out of action and unable to make it for her birth. We had decided to find out whether we were having a boy or girl so that we would both know and not miss that surprise together.

My sister in law joined me for the birth, and was a wonderful support. Maleah Moriah Strahan (beloved sacrifice) was born on June 4, 2010 weighing 6lb 7oz by Caesarian birth. She was covered all over in vernix, way more than the others were and her apgar scores were lower too. Nurses commented on whether she could have been premmi, with all the vernix, and with substantially smaller measurements to the others.

The next day, her Dr carried out a general check and he discovered she had no hip sockets / clicky hips. We had to go for scans to see the severity.

Scans showed Maleah had not developed hip sockets on either side. (Bilateral Hip Dysplasia) She was immediately placed in double nappies and not allowed to wear jumpsuits or tight fitting clothes, at least until a harness could be found. 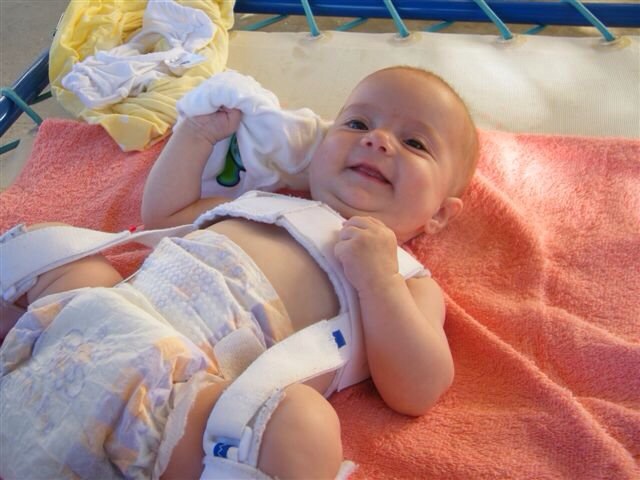 And so travel became even more regular for our family. We had a weekly bath and harness fitting in Tamworth (3hr drive) every Monday, and check ups – scans, baths, measurements – every 6 weeks in Newcastle (6hr train ride). All of this was until her hips had properly developed.

Maleah was a pretty settled baby, but occasionally around the same time of day she would scream an ‘agony cry’ – wanting to alleviate whatever it was that was causing her bother we would try feed her, burp her, change her and anything else we could try and do. During one of these episodes, I took off her nappy and saw a massive bulge in her groin – by the time I went to take a photo to show the doctor, it had gone and she was settled. I took her to the dr, where he said she probably had an inguinal hernia, which needed to be treated as it could affect the digestive system quite severely if not dealt with. So, we now had another specialist appointment in Newcastle. I look back over that time and can only see God’s help. I’m not the kind of mother that can settle babies in my arms very well, and so travelling on the train was a bit unsettling for me. But God always settled her – I had never had so many times where a baby fell asleep in my arms. God also protected me. Once in all those trips was there trouble – after a build up of events some sleazy guy asked me if I was married or not – after telling him that I was happily married he left me alone.

I also recall complaining about how Maleah couldn’t wear these pretty clothes I had bought her and the frustration of travelling, and leaving behind Paul, Grace & Reuben. As I walked into the waiting room in Newcastle, so many other parents were there with their children – some with the same health concerns, others with long term concerns. Who was I to complain? There was plenty to give thanks for.

Maleah ended up having surgery to fix a belly button and inguinal hernia. She wore her harness for 5 months, until she had fully functioning hips. 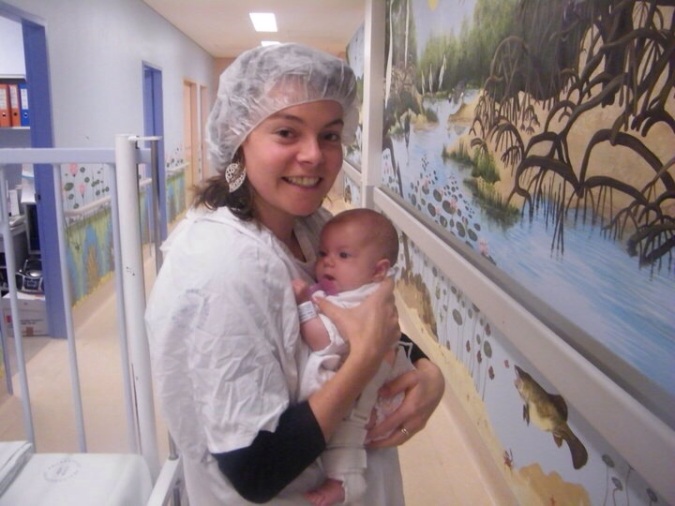