“Christmas…is love in action…when you love someone, you give to them, as God gives to us. The greatest gift He ever gave was the person of His Son, sent to us in human form so that we might know what God the Father is really like! Every time we love, every time we give, it’s Christmas.” Dale Evans Rogers

Each Christmas God expands on a different ‘part’ of the nativity and brings New richness and deepness.

This year it’s been about the inn.

In the middle of October, on Paul’s birthday, we took in a 15 year old girl. A month later a 17 year old girl with her 6 month baby was asked to leave the place they were staying. It was supposed to be temporary until housing found her another place. She’s still here. A week or so after that, (by now times and dates are rather vague!) a family, that we go to the park with regularly, lost their baby to cot death. 3. Weeks. Old. That night we housed 2 extra teenagers, on top of the two teenagers and baby currently lodging with us. (I really struggled that night, especially as we had all planned to go to an open air outreach night in a local street we pick kids up from). I was weary, and somewhat heavy laden. I rang a friend to come and help me keep sane. We shared and prayed together, and saw the evening through. Right in the middle of that night, we received a call from an older guy, whose step daughter was in trouble with police, and was in desperate need of a place to stay. I had to say no. We literally had nowhere else to house anyone. The couches were full, all mattresses were occupied. Our inn was full.

What do we do when the inn is full?
We pray and place it in His hands. God knew the inn was full. Plan B was really plan A. He’d planned all along that Jesus would be born in a stable – the outhouse of the inn. The place where the visitors to the inn would leave their animals. Because in the weakness & meanness of the situations we find ourselves in, God’s glory & grace is the greatest.

I probably could of handled this situation with a lot more grace and less complaining, less tears, and less doubts. It’s been 3 months of comings and goings, including being inundated with 20 people turning up at home wanting us to help plan the funeral…..music, hand out etc – alongside emotional support. Yep, I could have handled it better. But we learn don’t we?

Throughout the chaos of those months God faithfully provided HOPE moments, where Paul and I could just look at each other, and know everything was going to be ok.

Ministering to the residents of the Inn…

“Christ was born at an inn; he came into the world to sojourn here for awhile, as at an inn, and to teach us to do likewise. We are become by sin like an outcast infant, helpless and forlorn; and such a one was Christ. He well knew how unwilling we are to be meanly lodged, clothed, or fed; how we desire to have our children decorated and indulged; how apt the poor are to envy the rich, and how prone the rich to disdain the poor. But when we by faith view the Son of God being made man and lying in a manger, our vanity, ambition, and envy are checked. We cannot, with this object rightly before us, seek great things for ourselves or our children.” Matthew Henry

At the breakfast table most mornings I like to have a read and pray with the kids. Having extras in the home who aren’t used to this made me feel a bit uncomfortable and unsure as to how they would take it. One morning, I tried to ‘get out of it’. But I became aware of God ‘nudging’ me to keep doing it. The other girls were sat on the couch the first day. They kept themselves occupied with something else and walked out. But, the days that followed they lingered. They’ve even started ‘drifting in’ from other rooms in the house during this time. 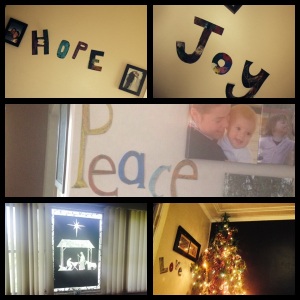 Another thing I did this Christmas season, was reduce the red and green and focus on Jesus. That’s what we wanted to teach the children, so why drown it other with other stuff? We made window silhouette things – with help from a close friend! We used the cut out bits of the words, coloured them in and stuck them around the house, to remind us of a few things we can learn about during Christmas. It also become a visual reminder to those who enter the inn, and on a number of occasions has started some conversations.

Having extra residents in the inn, has also brought along more visitors. I will admit I still get on edge. I worry about what might be stolen, and on occasion can get quite defensive and rude. We had our ipad stolen a couple of months ago. Through a bit of researching Paul was able to get this back. I sat in the van praying for his protection as he approached the home of a drug dealer who had bought our ipad off some younger boys!

As we lie awake at night unsettled by the vulnerability of the inn and the ones we are responsible for in the inn, what do we do? We pray, and we act. When God doesn’t give peace, we walk around our home and pray. We look out the window and pray God might put His angels around our home and keep away trouble….and then we leave it in His hands.

What does your inn look like? What sort of inn-keeper are you? Check out this passage in Proverbs. We can use it to consider what sort of things we can do as an inn keeper for our household.

“She gets up before dawn to prepare breakfast for her household and plan the day’s work for her servant girls. She goes to inspect a field and buys it; with her earnings she plants a vineyard. She is energetic and strong, a hard worker. She makes sure her dealings are profitable; her lamp burns late into the night. Her hands are busy spinning thread, her fingers twisting fibre. She extends a helping hand to the poor and opens her arms to the needy. She has no fear of winter for her household, for everyone has warm clothes. She makes her own bedspreads. She dresses in fine linen and purple gowns. Her husband is well known at the city gates, where he sits with the other civic leaders. She makes belted linen garments and sashes to sell to the merchants. She is clothed with strength and dignity, and she laughs without fear of the future. When she speaks, her words are wise, and she gives instructions with kindness. She carefully watches everything in her household and suffers nothing from laziness. Her children stand and bless her. Her husband praises her: “There are many virtuous and capable women in the world, but you surpass them all!” Charm is deceptive, and beauty does not last; but a woman who fears the Lord will be greatly praised. Reward her for all she has done. Let her deeds publicly declare her praise.” Proverbs 31:15-31