One day, I googled something like “children with bad sleep habits and tantrums”. Numerous articles came up about methods of teaching your child to settle, sleep through, stop/minimise night terrors etc. But one article came up that I wasn’t expecting.

Women and Girls on the Autism Spectrum

This article didn’t perfectly describe her, but it made it clear that children, particularly girls can ‘express’ autism differently to the stereotypical expressions of autism. This article talked of a huge imagination. Now, anyone who has met and interacted with Maleah will soon find out about her Imaginary Kingdom. She’s had Israelites, she’s had groups of Mums, brothers, sisters and we don’t know what will happen to them from one day to the next. We’ve had funerals, we’ve had broken legs, we’ve had …. the list goes on. 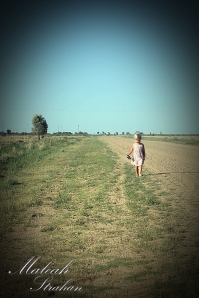 The article also talked about sensory overload. This is the part that really interested me. We had noticed that there were some sorts of clothes that she really didn’t like, and some clothes that she absolutely clung to. The authors suggested putting her in tight clothing through the night and putting on a heavy blanket, wrapped tightly around her, as it would keep her senses ‘active’ through the night. That night I found the heaviest blanket I could find that wouldn’t overheat her, and for the first night in a very long time Maleah slept through the night.

The other thing the article suggested was waking her a bit earlier in the morning, and putting her to sleep a little later at night. We had tried this unaware of just how helpful it was. We had observed that if we let her play with duplo in the evening while the others were going to bed, that when it came time to settle her, it was a lot quicker, and happier! So we continued to do this.

From when she was born, Maleah had NEVER liked her seatbelt. I really just thought she was defiant and extremely strong-willed. With all our regular travelling to Tamworth in those first few months, her seat was definitely not her favourite place to be. As a toddler, this proved more and more difficult. A simple trip to the Supermarket, if I was being diligent would result in having to stop 2 or 3 times to rebuckle her in. We tried different harnesses, different seats, even a child-proof lock, which within 3 weeks she managed to open herself and then hide! Never to be found again!

I was becoming more and more convinced that we needed specialist help, to work out what was going on, and how we could help her be happier and safer! So, I rang the Health Nurse to book in for a chat. A lady answered, she had a bit of spare time, so I share some of our observations. She booked me in for a chat with a more specialised health nurse, but also shared that she had heard of a Chiropractor in Inverell (1 1/2 hour drive from us) who specialised in Child Behavioural Therapy. Woah. I rang them up, and they didn’t have an appointment for a couple of weeks.

I hadn’t heard much about Chiropractors, and truth be told, I probably thought they were a bit spiritually weird (yep, clearly, I really had no idea what I was on about! ha!).

Anyway, the day of the Health Nurse appointment came. I had decided to go with an open mind, If she should Autism was out of the question then I’d be open to that, but was still after some direction. We turned up and Maleah was wonderful. I explained to the lady our struggles and she reassured me that this was a phase, she definitely does not have autism, she’s just the middle child and Paul and I need to modify our parenting approach. More ignoring, less correcting. As humble as I had intended to go, I felt like a fool and the only advice I was given was to pick up all the kids and remove everyone from wherever she was having this meltdown and that kind of isolation would soon teach her, that her behaviour is inappropriate.

I went home with a heavy heart. Hopeful, that maybe this Chiropractor might be able to shed some light for us.